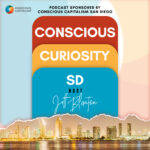 Jesse Langley, the COO of Lotus Sustainables, is on a mission to eliminate 10-billion plastic bags from the environment by the end of 2022.  Join us as he shares his adventures in pushing the limits of Sustainable Entrepreneurism.

Jesse was born a Conscious Capitalist.  He kicked off his career to save the planet and make some money doing it, at the ripe age of eight years old.  From pushing the limits as a ski racer to adopting the T.S. Elliot mantra, “You will never know your limits unless you push them yourself,” Jesse has continuously walked the talk.

He kicked off his career to save the planet and make some money doing it, at the ripe age of eight years old. From there his journey includes being a Navy Special Ops, building a sustainable resort in Fiji, to multiple adventures around healthy foods.  Today, his role with Lotus Sustainables is one more example of Jesse holding the course of doing good while honoring both the planet and profit.

Join the conversation and learn from Jesse:

This is a must listen conversation if you are an entrepreneur, a Conscious Capitalist, and have a desire to ensure your grandchildren will have a healthy planet in which to live and thrive.

After you listen and are inspired by Jesse’s story, become a Conscious Consumer through education and the personal choices you can make as a buyer.

Check out Jesse’s recommendation and watch the trailer:  The “Story of Plastic” on YouTube.

We are heavily engaged with Conscious Capitalism San Diego. Visit their website to learn more or explore the Conscious Curiosity SD Podcast, Hosted by Jeff Blanton.